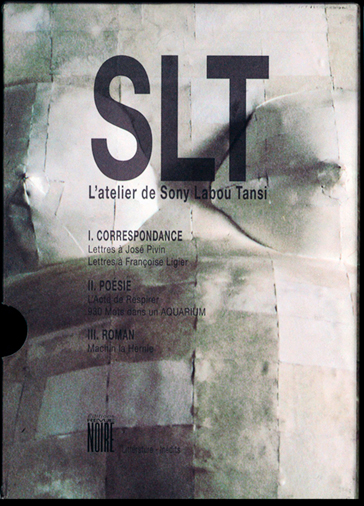 BOX OF 3 BOOKS OF UNPUBLISHED WRITINGS

"You say a dirty word Jose : Die. Just when I write something called "The fear of dying life". I want to repeat to you that we do not die. We stop breathing. And maybe ! If I was not sure of these things, I do not worry say you anything. We do not find them with calculations. Because calculation it is a false measure. It does not find with pope or sermons. They are found in the sound of his breathing ; the smell of his ass.

The joy of knowing. And knowing with violence - permission to heal the void. My friend José... I say we can not be used to kill time. You stop ideas. Me, I go down down, until my flesh adjusted. I kill the words. I kill idea. I live to me. There inside, I have beaches -some Pivin, some Françoise, some everybody, 1500 m of soil in bones. But I do not rotted. It's silly rot."

(extract of a letter by Sonny Labou Tansi to José Pivin)